The Jews are not Jews-DNA evidence:

DNA Science has confounded the Christian evangelicals by proving conclusively that most of the people in the nation of Israel and in World Jewry are not the descendants of Abraham.

Those living today who profess to be “Jews” are not of the ancient Israelites, and they are not the seed of Abraham. In fact, the new DNA research shows that the Palestinians actually have more Israelite blood than do the “Jews!”

WAS THE PATRIARCH ABRAHAM JUST A STORY?  DID ABRAHAM EXIST?  You decide:

Historians date Abraham’s bibilical story around 2000 B.C., based on clues in Genesis Chapters 11 through 25. Considered the first of the biblical     patriarchs, Abraham’s life history encompasses a journey starts that in a place called Ur. In Abraham’s time, Ur was one of the great city-states in Sumer, a part of the Fertile Crescentlocated from the Tigris and Euphrates Rivers in Iraq to the Nile in Egypt. Historians call this era from 3000 to 2000 B.C. “the dawn of civilization” .

It turns out that Abraham in the Bible is undoubtedly just a story.

Abraham in the Bible:  Promotion of lands surrounding and now occupied by Israel began a long time ago in the Old Testament. The Judean scribes did their writing in about 700 BCE, referring to happenings that supposedly existed  more than about a thousand years prior to when they were writing.

Abraham has all the trappings of being just a made-up story.

From the Highly Recommended book, by  W.H. Uffington,  “The Greatest Lie Ever Told”, available on Amazon here: http://www.amazon.com/Greatest-Lie-Ever-Told/dp/0956798004 :

“With a sleight of hand – the one holding the pen – a new history, a new beginning was invented.  And to ensure that no one dared to question its authenticity, we are told that God himself had guided this hand. Fear turned the lie into unquestionable truth.

All the archaeological evidence shows that the people residing within the lands of Canaan were and always had been Canaanites….  There are no grounds for the argument that Abraham infiltrated the area around 2000 BCE. …

The answer is, of course, straightforward: rather than true and accurate eyewitness accounts of history, carefully passed down through the generations, the stories were just vague tribal myths and legends, eventually cobbled together by politically-motivated priests and scribes who were entirely ignorant of any real historical knowledge.

Christian Biblical scholars still insist upon the Bible’s historical authenticity, even pointing out that it is the accurate historical details in the stories which prove that they are genuine: an odd claim when the Bible is so full of his historical inaccuracies. Surely, if the proof is in the detail, then inaccurate detail will undermine the whole foundation. We find such an example of this small detail in Genesis 24, that talks of camels being taken through Mesopotamia; women, children and servants riding on camels and indeed, camels repeatedly crop up in the patriarchal stories. Yet we find that camels were supposedly, first domesticated at least 200 years after Abraham’s time and they were not used it all as beast of burden until about 1000 years later. Excavations of camel bones indicate that camels were used extensively in the seventh century BCE and became a common site around the Middle East, including Palestine.  The camel became a preferred means of transport just around the time when the first biblical stories were compiled.

The next anomalous detail is the reference to shekels as a means of payment: it is out of its historical era by a considerable margin. The shekel was not Canaanite but Hebrew; nor was it a coin, but a unit of weight, much later used as a silver coin. According to Herodotus the coin first appeared sometime after 550 BCE”

Did the Great Empire of Solomon ever exist?

“If the great empire never existed,  what  of the great building programme undertaken by Solomon, surely this would support the biblical claims. The problem is, that modern archaeology has failed to find any great structures that might have been built by Solomon. In the past, the opposite was the case: early archaeologists hoping to prove the Bible to be true looked for anything that would confirm it, even if they were fairly liberal with the actual dating. …..Now we have the problem of Jerusalem itself – the capital of the great Solomonic empire. We are given the image of Jerusalem as a place of the impressive grandeur , having a magnificent Temple and a great gleaming palace to house Solomon’s 700 wives and 300 concubines, all protected behind huge stone fortress walls – a glorious fabled city which reflected the glory of God. Alas, it is all romantic nonsense. Despite extensive excavations, archaeologists have failed to locate any signs at all that there was ever a Solomon temple, or palace, or great fortifications….

The harsh truth is, that both David and Solomon – if indeed they actually existed, which we must doubt since there is no contemporary evidence to support that they did – would have been little more than tribal chiefs. Considering the poverty of the region and its historical reputation for banditry both David and Solomon nestling in their remote hilltop village, could well have been bandit chieftains.

There is no real evidence to confirm that either of these two kings actually existed, but what we do have is legend, which came about following the story’s vigorous promotion by the later Judean state.

There is  awesome revealing and shocking information in the book:

“They fought against Midian, as the LORD commanded Moses, and killed every man……..Now kill all the boys [innocent kids]. And kill every woman who has slept with a man, but save for yourselves every girl who has never slept with a man.  (Numbers 31:7,17-18)”

Kill everything that “breathes” from humans and animals!  Deuteronomy 20:16

How about this:  There is no evidence for the existence of Moses. Although he is portrayed as an influential member of the Egyptian royal household, he is not mentioned in any Egyptian record. Nor is there any evidence to support the idea that the Jews were ever held captive in Egypt or that they made an exodus from the country under Moses’ command. The Egyptians chronicled their history in great detail but make no mention of any captive Jews. Amongst the hundreds of thousands of Egyptian monumental inscriptions, tomb inscriptions and papyri, there is complete silence about the ‘600,000 men on foot, besides women and children’ who The Book of Exodus tells us escaped from Pharaoh’s armies.

The story of Moses, with its many miracles, has all the hallmarks of a myth. The account of Moses’ birth is a retelling of the myth of the birth of Sargon the Great, the king of Akkad, which is known in a number of variations from the early sixth century BCE. Like Moses, the child Sargon is ‘set in a basket of rushes’ and ‘cast into the river’, from which he is later rescued by an influential woman.

IMAGE OF SARGON THE GREAT

Israeli archaeologist Ze’ev Herzog(1) provides a controversial consensus view on the historicity of the Exodus and some other parts of the Hebrew myth.  In 1999, Haaretz weekly magazine cover page article “Deconstructing the walls of Jericho” attracted considerable public attention and debates. In this article Herzog claims that “the Israelites were never in Egypt, did not wander in the desert, did not conquer the land in a military campaign and did not pass it on to the 12 tribes of Israel.

Perhaps even harder to swallow is the fact that the united monarchy of David and Solomon, which is described by the Bible as a regional power, was at most a small tribal kingdom. And it will come as an unpleasant shock to many that the God of Israel, Jehovah, had a female consort (Asherah) and that the early Israelite religion adopted monotheism only in the waning period (c920-900 BC ) of the monarchy and not at Mount Sinai”

If the whole Exodus story itself is unhistorical we can safely dismiss the other parts of the story [the parting of the Red Sea (Exodus 14:21), the manna from heaven (Exodus 16:15-35) and the supply of water from the Rock in Horeb (Exodus 17:7)] as mythical addition to an already fictitious account. 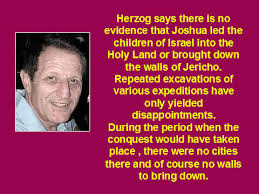 Ze’ev Herzog (born 1941) is an Israeli archeologist, professor of archaeology at The Department of Archaeology and Ancient Near Eastern Cultures at Tel Aviv University.

Ze’ev Herzog is the director of The Sonia and Marco Nadler Institute of Archaeology since 2005.”